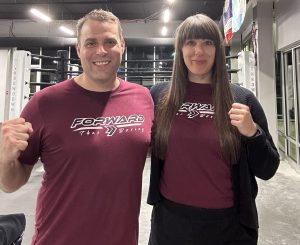 Abbe Braun has been passionate about Thai boxing (Muay Thai) for the past decade. She holds a Black Sash rank in Muay Thai and is World Thai Boxing Association Amateur Champion silver medalist.

Braun began her career in early childhood education, then worked at a government-funded nonprofit in early childhood education, focusing on policy work. She and her husband Brendon Shoemaker taught Thai boxing at a local Madison gym, and Braun began to think about her next challenge. Her students and instructors had been asking when she and Shoemaker would open their own school, which they had dreamed of doing, so they began taking steps to make it a reality.

In addition to ten years of experience competing in and teaching Thai boxing, Braun developed project management and budgeting skills during her career in grant management, which helped her develop a strong business plan and financial projections. Her accountant recommended the Wisconsin Small Business Development Center at the University of Wisconsin-Madison Wisconsin School of Business (SBDC), and she was paired with business consultant Amy Bruner Zimmerman in March 2022. During monthly meetings, Zimmerman worked with Braun to fine-tune her projections and determine the best approaches for financing.

“I feel like I hit the jackpot with Amy,” says Braun. “There were so many times when I felt overwhelmed, and she helped me recenter.”

Zimmerman helped Braun with market research, helping her narrow in on market data.

“Having broader data made it easier for me to write about my specialty and speak anecdotally and sound stronger,” says Braun. “Amy asks really good questions to help me make sure all the pieces are in place. She’s always in my corner and makes me feel confident about my decisions.” 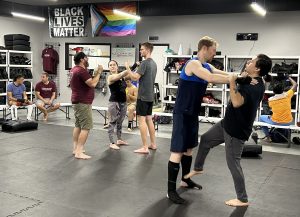 Muay Thai is a Thai style of kickboxing also known as “the art of eight limbs”: two punches, two elbows, two knees, and two kicks. A competitive ring sport, Forward Thai Boxing instructs students and supports a competition team, coached by Shoemaker. Muay Thai is expanding in the U.S., likely due to the popularity of kickboxing and its increasing presence on TV.

Krav Maga is an Israeli self-defense form of martial arts focused on self-defense in real-life situations. Students learn how to break a chokehold and strike people effectively.

“More women will come into martial arts through Krav Maga and self-defense,” says Braun. “They’ll come in the door, see a Muay Thai class, and be willing to try that. People come for fitness, and they like that they can come learn an adult-centered martial art that’s easy to pick up, with other adults, and get a good workout. Plus, martial arts is a community, with partner work.”

As Braun prepares to launch her business, she’s already planning its next phase, planning to launch a kids program, female-specific programming, and community programming. She also plans to take some SBDC classes, maybe in digital marketing. She appreciates the SBDC’s commitment to the full lifecycle of the businesses it supports, from the startup phase to the middle phase and even an exit or closure.

“I know Amy will always be there for me, and I see myself being able to reach out to her at any point,” says Braun. “She is the complete package.”

For now, Braun is excited to see her dream come to life.

“We love doing martial arts and the community it brings,” she says.