When Kirk Smock was living in Mozambique for four years, he baked bread for his family and other expats who missed sourdough bread. But Smock’s bread isn’t just any sourdough–it’s long-fermented whole wheat sourdough made with local grains.

When Smock’s family decided to move back to Madison, he began thinking seriously about starting his own bakery. 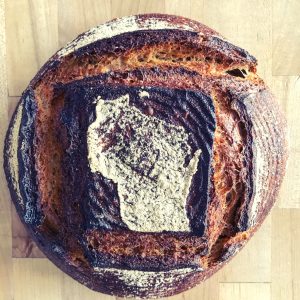 Launching a bakery with SBDC support

In December 2015, on a family visit to Madison for the holidays, Smock spent some time looking for available kitchen space. He reached out to Common Wealth Development, from whom he now rents space. Their head of business development at the time suggested he pursue the

While he was still in town, Smock contacted the SBDC and connected with senior business consultant Rena Gelman, a former Madison restaurateur whose specialty is launching startup food businesses. They set up a meeting and agreed that if Gelman thought Smock’s plan could work, and they both felt they’d collaborate well, they’d stay in touch. The meeting went so well that Smock started planning his business, along with his family’s return to Madison, from January until May.

“I decided it was now or never,” he says. “I didn’t know for sure what pieces would work, so I planned it inexpensively. That way, if I decided I didn’t want to do it after all, or it didn’t work out, it wouldn’t be a big loss.”

Gelman’s experience in the Madison food world helped Smock gain a sense of the bread landscape in Madison, as well as prices, after being away for twelve years.

Smock had considered a CSA model, but Gelman suggested he get his bread into stores wholesale first. He baked loaves, took them to stores, and asked if they’d sell it.

“It grew quickly enough that I felt traction early on,” Smock says. “My first store was Jenifer Street Market. The manager’s father was a baker, and he grew up working in his dad’s bakery and said, ‘We’ll give you a rack.’ He ran me through invoicing.”

Next, Smock landed shelf space in the Regent Market Co-op, the Fresh Madison Market on campus, Metcalfe’s, and eventually Willy Street Co-op. Gelman served as the voice of reason throughout Origin Breads’ growth and still works with Smock. In late 2019, Smock secured a loan from the U.S. Small Business Administration (SBA) and moved into a new space in Main Street Industries, which he says felt like starting fresh again.

Gelman prodded Smock to think through aspects of the business that would matter as it grew, like inventory, dealing with vendors, and handling ordering, invoicing, and billing. She helped him think through employee pay, the possibility of offering employee benefits down the road, and juggling the responsibilities of baking and business operations.

“Origin Breads was just me for so long, and then it became bigger than me, and she helped me realize I would have employees to handle baking, deliveries, and sales, and I could step back and run the business,” he says. 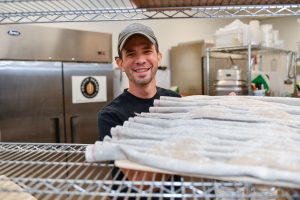 When Smock started his bakery, he wanted to use local grains and build a food business that could create careers for his employees.

“Now, I have seven employees, and I’m paying them well and would like to create the best business working environment for them, so I’m exploring how I might create benefit plans for them,” he says.

Smock’s next step is to grow additional areas of the business. The new space has room for retail, so he’s thinking about what he could sell on-site. Last summer was his first year at the Farmer’s Market on the Capitol Square.

“We did great, and there’s lots of potential for growth, so we’re focusing on how to grow that,” he says. “It introduced us to a new customer base.” 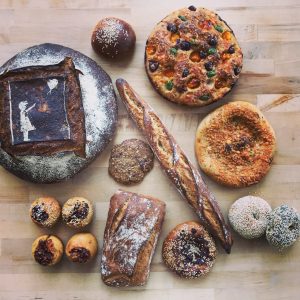 His granola product is also growing, with the addition of two new flavors, redesigned labels, and plans to get it into more stores.

“We get inquiries from Milwaukee about our granola going into co-ops there,” Smock says. “I’m focused on slow, organic growth that doesn’t overwhelm me or my staff.”

Origin Breads grows every year, and Gelman has been there to help him expand.

“It’s been five or six years we’ve been talking, and there’s a friendship there,” Smock says. “I always appreciate her willingness to listen to different ideas, provide honest feedback, and either encourage me or set me straight. Knowing she’s someone I can count on, who has a ton of experience and will always give me an honest answer, is refreshing.”